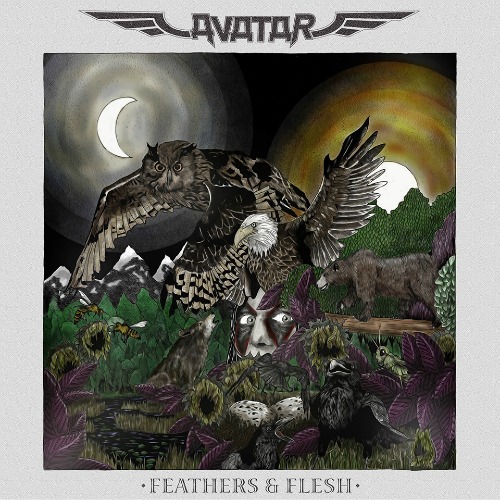 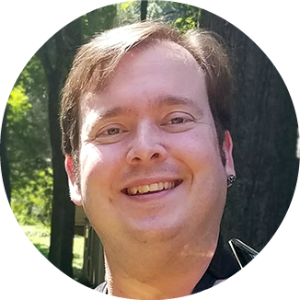 An owl soars through the night sky, enjoying her dominance over the land. As she swoops and dives and flies, she ponders on her place in the world. Suddenly, from behind an emerald tower, an eagle dives in with a bit of uninvited arrogance, bringing with him change, and the light. The owl gathers her children close and races away, looking for a place for them to hide them. She plots to gather an army of nocturnal creatures to help her win a war against the eagle and ultimately destroy the sun so she can continue to live in eternal night. This is the concept behind Avatar’s fifth album, Feathers & Flesh.

Hailing from Sweden, Avatar has an interesting band story. They formed in 2001, and after releasing their first three albums and achieving relatively mediocre success, they re-branded in 2012 to a more big top and circus-type feel. Adding face paint and a ring-leader motif, they worked on incorporating more vocal variety and melody to their songs. While their last two albums, Black Waltz and Hail the Apocalypse, have more of a distinct sound that sets them apart from their previous work, they both still tend to fall in to pseudo generic metal category. Good albums, fun to listen to… but nothing that truly stands in the sea of metal that’s been released in the past few years.

Now, fast forward to their most recent album Feathers & Flesh. It is a fable concept album that tells an epic saga while trying to teach a moral lesson to the listener. There is an old classical piece from 1936, Prokofiev’s Peter and the Wolf, which was a commissioned piece meant to introduce and teach children  how to listen to classical music. They used a narrative mixed in between the music to explain how all of the different instruments represented different animals; as you listened you could start to pick up what was happening as the song went on. Feathers and Flesh has this same sort of vibe. The different musical and vocal styles vary throughout and help to express each of the animals and their respective parts in the story.

The music itself is outstanding. Each song has its own personality, consisting of a mixture of quick guitar solos, catchy lyrics, wide variations of drum patterns, and vocals that range from lighthearted singing to guttural growls. It opens with a slow short somber song called ‘Regret’, and then bursts through the speakers with ‘House of the Eternal Hunt’, which is a nice introduction to Avatar’s style. The drums are heavy, the bass deep, the guitar work precise, and the vocals go from clean, to aggressive, and then back again.

The ninth track, ‘Black Waters’, involves the Owl second guessing herself and giving up the fight. She meets a carp who tries to convince her to join him under the surface of the water where all of the depression and loss that happening on can’t effect her. It’s heavy, brooding, and has a very blues-oriented influence. Another song, ‘For the Swarm’, it a short yet high tempo piece about the hive worker mentality. It sounds like they took a page from System of a Down with their chords and singing technique. I think that this kind of variation is why the record stands out so much. The songs are each so unique, yet has Avatar’s style thrown in. It makes listening to the whole album a treat.

The vinyl is a double LP (both a yellow and orange disc) with three sides, and sounds great. I’ve been switching between the digital FLAC versions and the vinyl, and I’m hard pressed to say which variant I prefer to listen to. The vinyl is extremely clear and rich, and worth listening to.  If I had known how much I was going to enjoy this record, I would have preordered the bundle that came with the fully illustrated, 60 page hardcover poem book that goes along with the music. But I think the fact that this book even exists showcases how much effort Avatar put into making this album.

I really can’t say enough good things about this album. It’s a joy to listen to; and I’ve found that the more that I listen to it, the more I pick up from it. The effort that went into making this record a reality must have been gargantuan. It is a shiny gem that stands out from a lot of great music in my vinyl collection. While I’m not sure if it’s for everybody, I believe that everybody should experience it once. And when you’ve finished with side C, drop side A in again and hear how the first two tracks continue on from the conclusion. The story repeats and ties into itself, because one of the recurring themes that the album tries to share is that sometimes we just don’t learn the lesson the first time around.